The Year in Review

Edit: you should now be able to click each image to see the larger version.

I was compiling some images of the things I've made in the past year in order to send them to someone, and realized just how many things I've completed. They didn't all fit in the email, so I thought it might be easier to post them here. So this post is really for Lynn, but hopefully the rest of you will enjoy the costume eye-candy too. =)

I am not going to include photos of all the Louisbourg stuff in here - there's too much of it! But I finished the stays finally (with new linen tapes, seam covers, etc.) in January, and the gown and stomacher followed in April. The dress diary for those can be found here.

Completed in January:
- Louisbourg stays (1740s stays from Norah Waugh)
- Smokey purple wool petticoat for under silk petticoat for Louisbourg gown (you can see it worn with the 1770s caraco down in September)

Completed in February:
- 1530s English kirtle of red wool and silk velvet with silk velvet sleeves, entirely hand-stitched, worn with a black wool partlet lined in white linen, also hand stitched. All of this was made in one week before an event, because I decided I needed accurate Tudor clothing for the Renaissance theme. 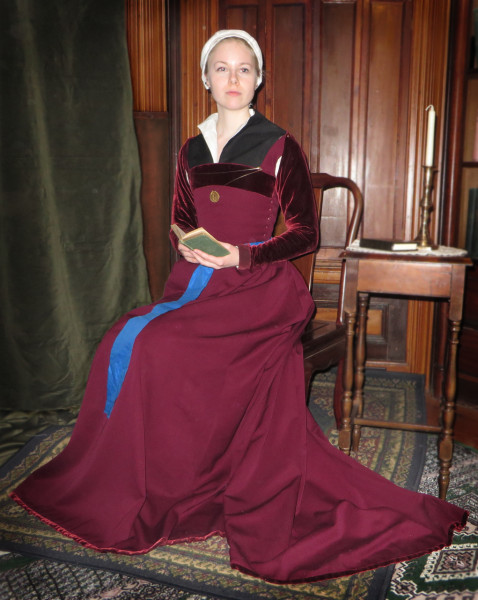 Completed in March:
Nothing actually finished. I was plugging away at the Louisbourg gown and stomacher.

Completed in April:
- Louisbourg gown, petticoat, and stomacher! Link to photos is above.
- 1840s tucked petticoat (entirely hand-stitched of cotton twill and cotton eyelet; cartridge-pleated onto waistband with hook and eye closure) Completed in May:
- Nothing completed, but I had put together the 1770s caraco and begun to paint it.

Completed in June:
- 1850s/1860s pin-tucked chemise (entirely hand-stitched of very fine cotton batiste with two types of cotton lace) - please excuse the HORRIBLE bathroom selfie photo of this (I'm so embarassed to post this!) - I need new photos of all my recent things. 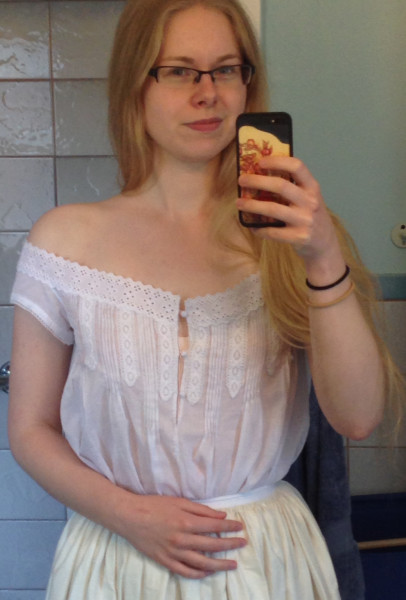 Completed in July:
Nothing. Working too much.

Completed in August:
- 1840s corded petticoat (entirely hand-stitched of cotton organdy and cotton cording; cartridge-pleated onto waistband with tie closure; based on museum examples from the 1830s and 1840s) 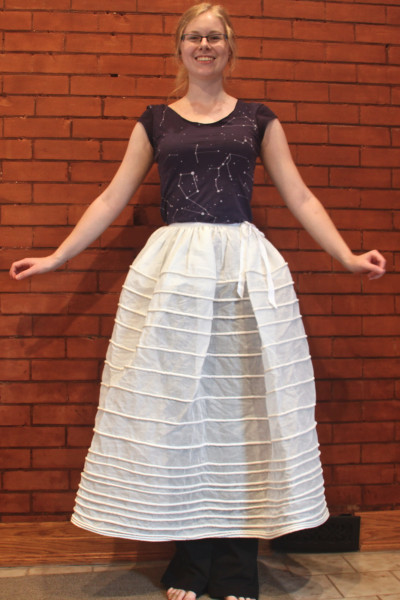 - Another 1840s petticoat, much plainer (no tucks; just a large hem), of white cotton broadcloth, cartridge-pleated onto waistband with hook and eye closure

Completed in September:
- 1770s Dutch ensemble (hand-stitched caraco jacket of cotton I hand-painted, with hand-stitched petticoats; hat was not made by me. Fichu is a store-bought printed handkerchief with green dye painted in by me a green border dyed by me and hand-stitched on so that it ties in the back) 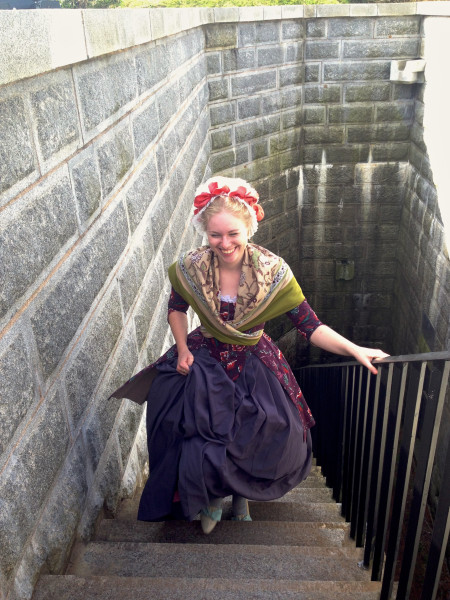 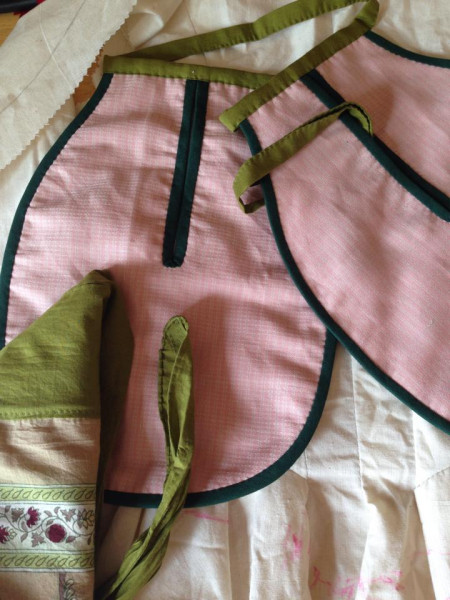 Completed in October:
- 1770s silk-cotton brocade jacket to wear with the Louisbourg stomacher. Somehow, I still haven't taken any photos of the finished product. I'll be wearing it to an even later this month, so I'll post some then. I swear it has sleeves now... Completed in November:
- Green velvet 15th century German "house book" gown with grand assiette sleeves and linen wulsthaube headdress, entirely hand-stitched, with cut brass details up the front, and red leather shoes with cutouts, hand-stitched in period turn-shoe technique. The shoes were finished last year, but I'm including them here because I haven't posted photos before. 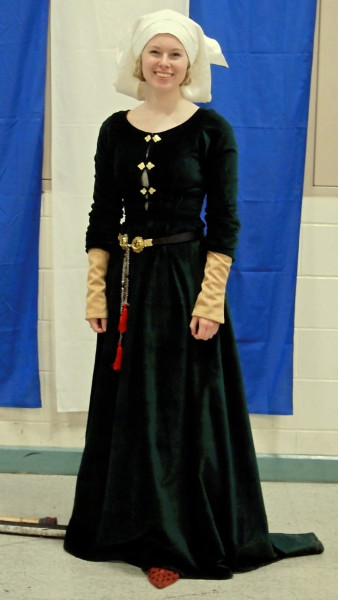 Here you can see the grand assiette sleeves: 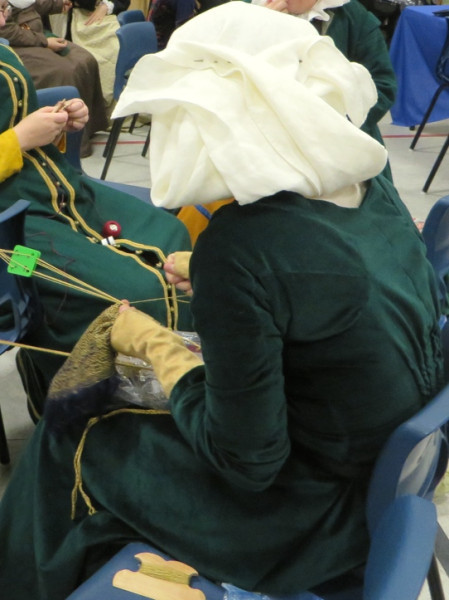 And a close up of the back pleats: 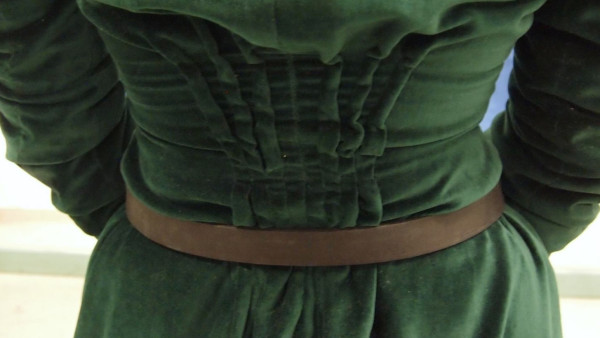 The demiceinte belt is leather covered in black silk, with brass belt ends purchased from a brass-smith in the Ukraine: 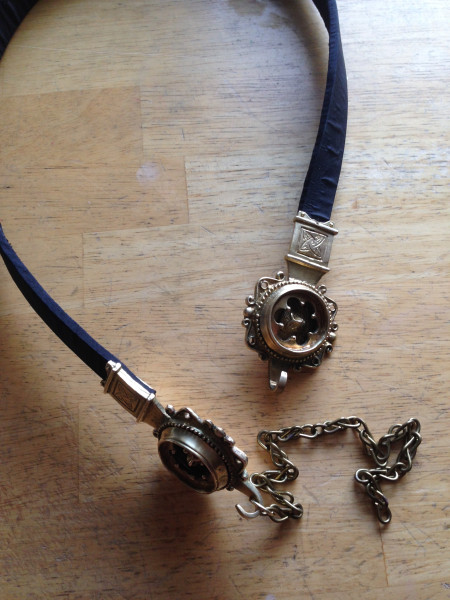 As I said, the shoes were finished over a year ago, but I've never posted photos before. This photo is from when the shoes were half-finished; there is cutwork done on both now and there is an extra leather sole on the inside to cover the seam allowances. 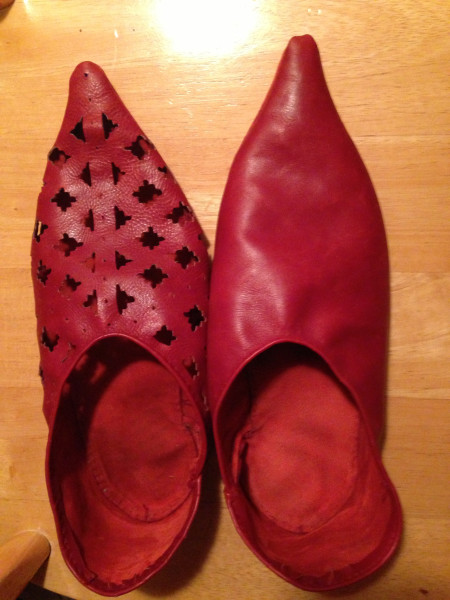 Completed in December:
ALL THE YARN
- medieval pavy weave wool and silk: - Mittens! These aren't historical, really, although they'd work for turn of the 20th century, but they were my first crack at colour stranding and I'm really proud of them so they're going in! - 7 yards of 35" wide red wool for an underpetticoat and a blanket for reenacting (was originally going to be an 18th century cloak, but it's really too coarse a weave and I can't get it to felt properly - but it will be enough to make a really warm winter under-petticoat and a lovely blanket!) Completed just after New Years:
These were mostly made over the Christmas break, so I'm including them.
- 1820s wrap stays front and back (entirely hand-stitched of various cotton layers, based on examples in the Met and the Kyoto Institute) 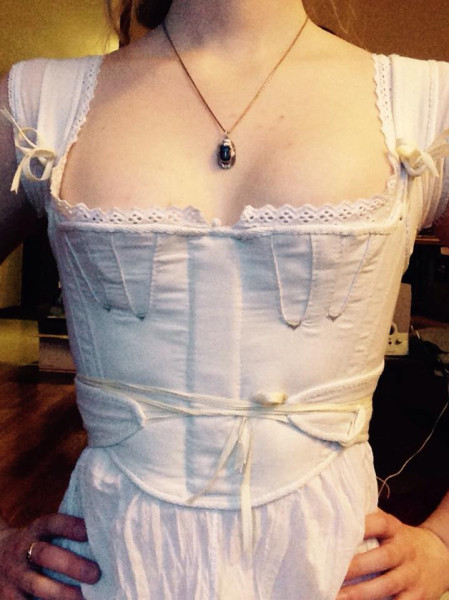 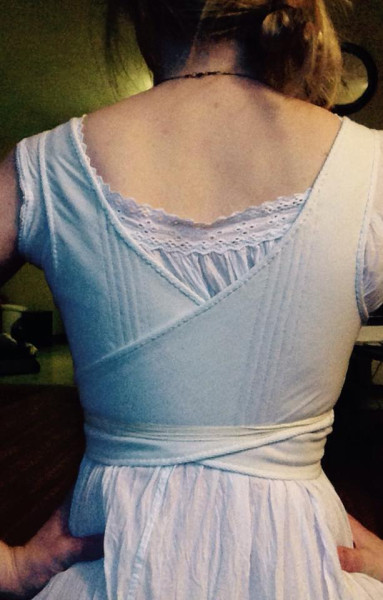